By Will Bordash ’18 and Brayden Zimmerman ’20

Numerous scholarly studies discuss economic evaluations and their partisan nature. Scholars have consistently found that partisans tend to evaluate the economy more positively when the president of their party is in office, and more negatively when the opposing party is in office (e.g., Bartels 2000, 2002, 2006; Evans and Andersen 2006; Gerber, A. S. and Huber, G. A. 2010). Discussions of economic optimism on a personal level and partisanship (and ideology), though, has received much less attention. We hope to shed light on this issue in the following report.

We begin by inspecting economic optimism based on party identification. We define being economically optimistic as expecting an income increase in the next 5 years, neutral as expecting the same income in 5 years, and pessimistic as expecting an income decrease in the next 5 years. As the following figures show, we find no major difference in economic optimism between self-identified Republicans, Democrats, and Independents. 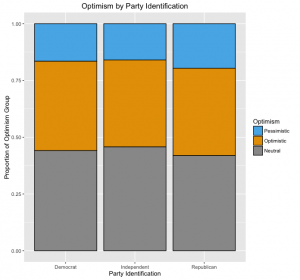 The graphs below focus specifically on those who are optimistic. Similar to our last report, “Economic Optimism: Does Age or Locality Have an Influence?” we code those expecting an income increase in the next 5 years as a “1” and those who are not as a “0”. To calculate mean optimism, each category was summed, and then divided by the total number of observations. Similar to the figure above, we find that there is no significant difference in economic optimism between Republicans, Democrats, and Independents. 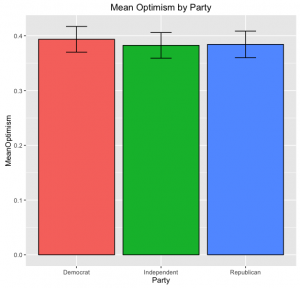 Interestingly, though, when looking at ideology, we find that conservatives are less likely to be optimistic than liberals. Although the level of pessimism is almost identical between those who are very conservative and very liberal,  those who are very liberal are much more likely to be optimistic. Also interesting is that moderates were the most pessimistic. 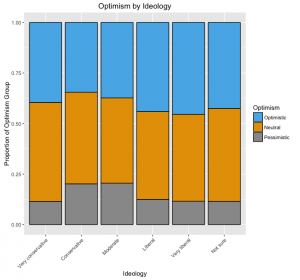 The graph below looks at ideology but again targets only those who are optimistic. 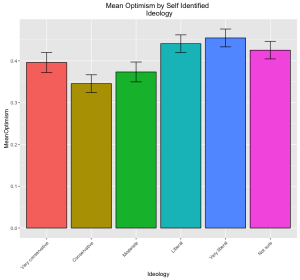 Posted by Will Bordash on March 3, 2017
Comments Off on Party Identification, Ideology, and Economic Optimism