Economic Optimism: Who has it and why does it matter

Even roughly three months after the last Presidential Election, it’s hard to make sense of what happened. Why was there such a large rejection of the “establishment?” Some have theorized that it’s because many Americans are becoming increasingly pessimistic about their future, and especially their prospects of economic conditions and growth. To better understand the ever changing American population, we will try to answer the question: who feels economically optimistic, and what effect does their optimism (or lack thereof) have on their political attitudes? In the coming weeks, we will look at factors such as income, age, location, religion, political views, and more as possible answers to this, “who question,” but for now, we focus solely on education, gender, and race and ethnicity. Tune in the coming weeks to see the roles the other factors play.

Before we begin to answer this question about the role certain factors have in economic optimism, we first look to previous research. Although there is an abundance of scholarly literature about the economy and economic decline, not much has been written about economic optimism and its effect on political attitudes.  Research done in the early 2000’s suggests that more education is associated with feelings about job security, which is part of economic optimism (Wiefek 2001). Other research shows that those who feel negatively about the economy feel more negatively about immigrants (Espenshade, T. J., & Hempstead, K. (1996).

To look into this ourselves, the Bucknell Institute for Public Policy Survey Center, in conjunction with YouGov, conducted a nationally-representative survey of 1,200 American Adults during July 2016. This survey worked to gauge attitudes toward a number of different aspects of citizens’ views toward their own economic standing, and the economic prospects of their communities and families. In this report, and the ones coming, we examine economic optimism by comparing the respondents’ expected family incomes in 5 years to their current incomes. We create the economic optimism variable as expected income in 5 years minus current income. We code a positive result (meaning the respondent expects to make more in 5 years than they’re making now) as being economically optimistic, a negative result as being economically pessimistic, and zero as being neutral.  From this categorization, we will explore how these three groups differ in demographics and sentiment towards different issues. 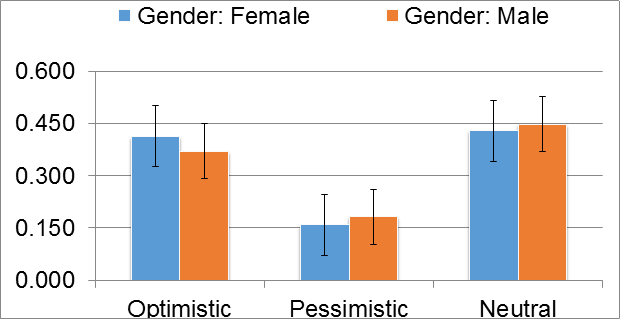 As mentioned earlier, we looked at three different factors and their role in economic optimism, namely gender, education, and race and ethnicity. The figure to the left shows that, while not significant, it appears that females may be slightly more economically optimistic than men. 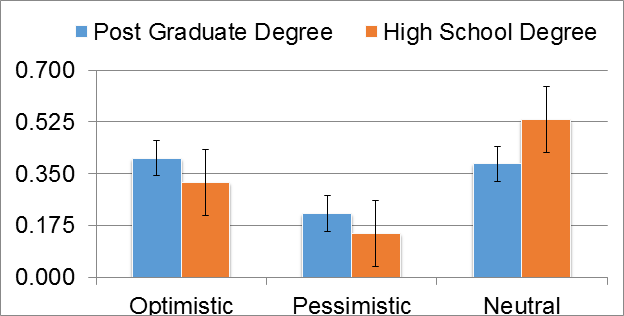 We see a much larger difference when we look at optimism in the scope of education. Similar to Wiefek’s (2001) findings, we see a positive association between education and optimism. Those respondents who only had a high school degree, though, were more likely to be neutral than those with a post graduate degree. 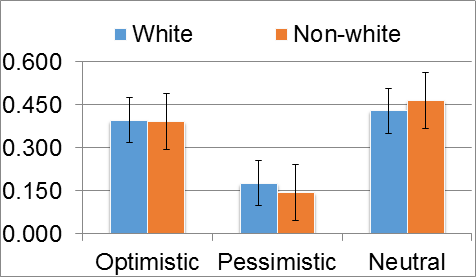 When it comes to race, we found a negligible difference between whites and nonwhites. 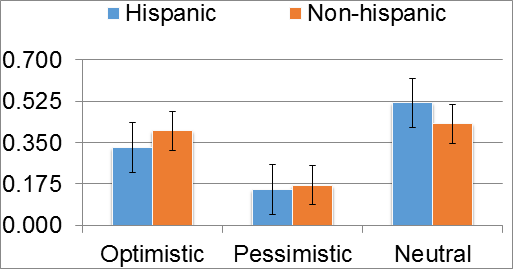 While there weren’t significant associations between optimism and gender or race, we see that there is a positive association between education and optimism. In the coming weeks, we will study the effect optimism has on other political attitudes, but in this report, we look to see if there is an association between economic optimism and attitudes about immigration. Here, we find a significant positive association. When asked to rate favorability of immigrants, economically optimistic respondents viewed immigrants favorably (favorability of 7-10) 10% more of the time. Those who were economically pessimistic viewed immigrants unfavorably (0-3)  a little under 10% more of the time. Similar to Espenshade and Hempstead’s (1996) findings, the figure below shows a clear and significant association between economic optimism and attitudes about immigration. 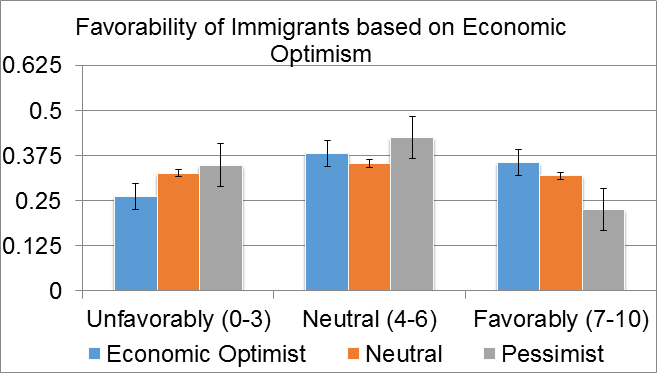 In an attempt to begin to answer the, “who,” question, we noticed that there is little to no association between being white and being optimistic. It seems that Hispanics are less likely to be optimistic, and more likely to be neutral than non-Hispanics. Additional research about the gap in optimism between black respondents and non-black respondents is needed.

In the coming weeks, we will dig deeper into the idea of economic optimism. We will look for connections between economic optimism and issues other than immigration. Until then, realizing that those who are less educated tend to be less optimistic is helpful in understanding our population.

Posted by Brayden Zimmerman on February 3, 2017
Comments Off on Economic Optimism: Who has it and why does it matter