Economic Optimism: Does Age or Locality Have an Influence?

Scholars have found a relationship between optimism and age. Most notably, Kowske, B.J., Rasch, R. and Wiley, J. J Bus Psychol (2010) found that, “Compared to Boomers and Gen Xers, Millennials reported higher levels of overall company and job satisfaction, [and] satisfaction with job security.” This research was the first to study generational differences in perceptions of job security while controlling for the confounding effects of age and time period.

Although job security and economic optimism aren’t the same, the two are definitely connected. Fig. 4 from Kowske, B.J., Rasch, R. and Wiley, J. J Bus Psychol (2010) above shows that, since the Boomers, feelings about job security have become more positive. We will look to see if this trend is also true of economic optimism (defined as expecting an income increase in the next five years).

Similar to our previous report, “Economic Optimism: Who has it and why does it matter,” we look into this issue using a nationally-representative survey of 1,200 American Adults conducted in July 2016 by the Bucknell Institute for Public Policy Survey Center, in conjunction with YouGov.

We begin by analyzing locality and economic optimism.

Figure 1: Economic Optimism and Region of US 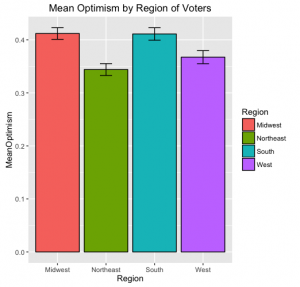 For this analysis, we focus specifically on those who are economically optimistic, meaning we code economic optimism as expecting an income increase in the next 5 years. Using the regional divisions defined by the United States Census Bureau, we find that those in the South and Midwest are significantly more optimistic than those in the Northeast and West. Unfortunately, more specific analysis cannot be done in this series due to the small sample sizes of individual states.  Further research into this topic would be interesting, and could provide more insight into the results of the 2016 Presidential Election.

We now investigate the influence age may have on economic optimism.

We defined those born in 1945 and earlier as the Silent Generation, 1946-64 as Baby Boomers, 1965-76 as Gen Exers, and 1977-1997 as Millennials. We find that Millennials are more economically optimistic than Gen Xers, Baby Boomers, and Silents. This research is not necessarily in disagreement with the research previously noted, as the graphs above don’t control for age or time period. As of 2016, Millennials are more optimistic than those from previous generations.

When looking specifically at optimism (only those who expect an income increase in the next 5 years), we find the same significant trend. 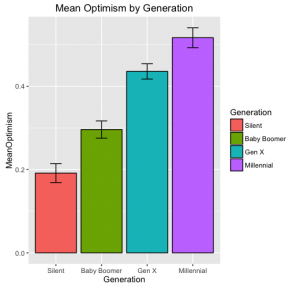 This is what we expected to find: younger people are generally more optimistic. Millennials are currently between the ages of 20 to 40 years old. They still have time to grow and make more money, while retirees, or people who are close to retiring, have lived through the majority of their lives.

Posted by Brayden Zimmerman on February 16, 2017
Comments Off on Economic Optimism: Does Age or Locality Have an Influence?