Written by Will Bordash ’18 and Brayden Zimmerman ’20

Over the past semester we have looked at economic optimism and perceptions of economic fairness from many angles. In our last, and longest report, we will look at the driving forces behind the differences we’ve found. We are especially interested in finding out if, as much of the scholarly work on this topic has shown and as we predict, partisanship drives all, or if income, race, or education play a bigger role. For this report, we split family income in three evenly distributed quantiles, namely lower, middle, and upper income brackets.

We will begin by looking at a very familiar topic- economic optimism. 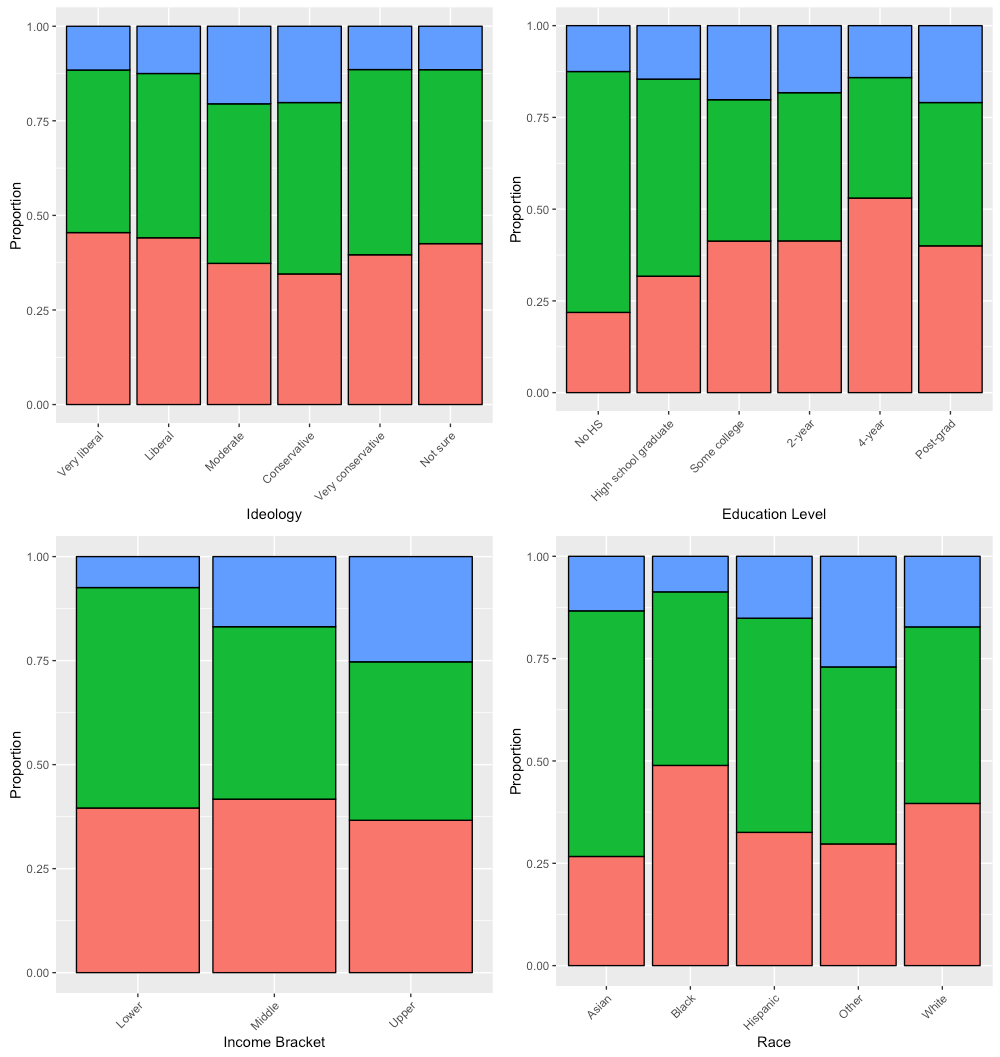 As we have shown in previous reports, it seems as if there is no major difference in economic optimism among those with differing ideologies, education levels, incomes, or races. We now turn to the question, “To what degree do you trust the government to do what’s right?” 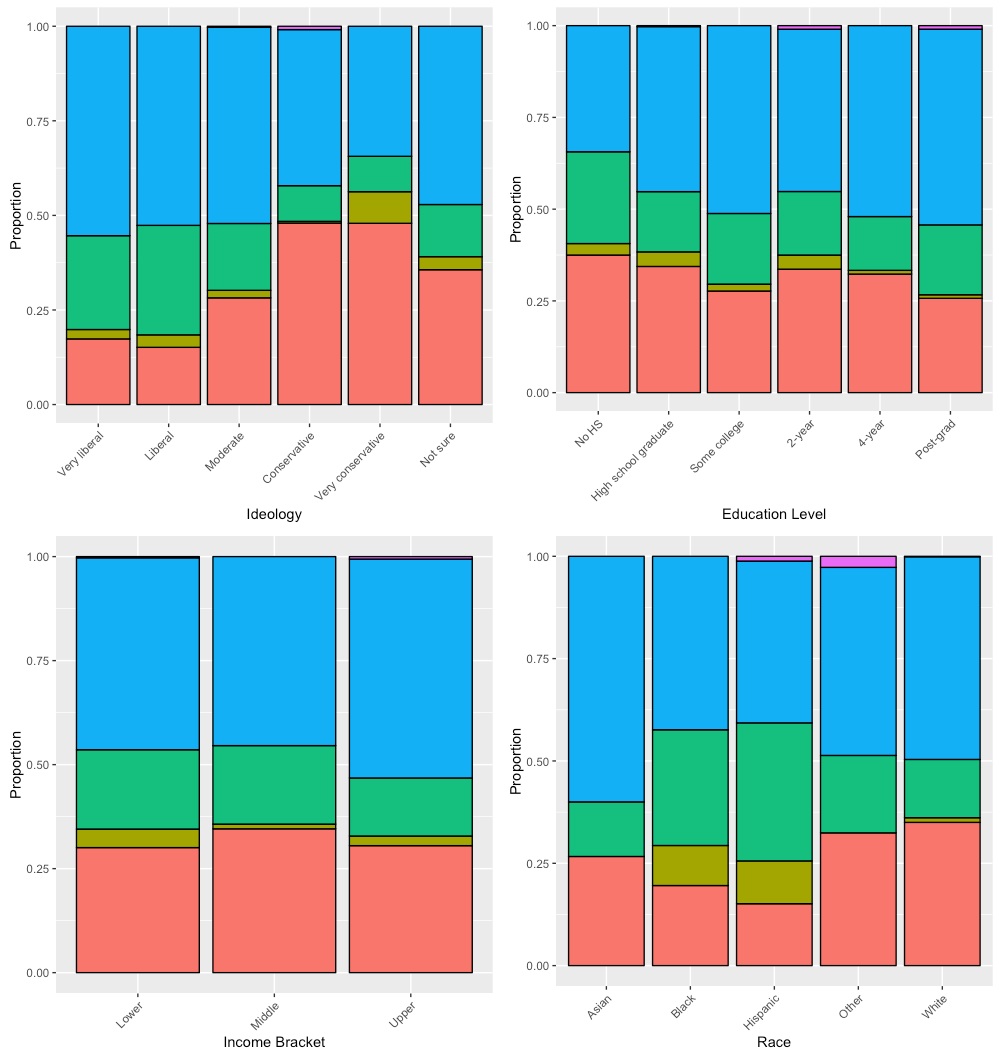 Figure 2: Trust the Government to do what’s right

This figure supports our initial hypothesis: partisanship/ideology plays the largest role. Moving left to right on the ideology graph, we see that “almost never,” grows, and “most of the time,” shrinks. We don’t see any change like that among different income quantiles, races, or education levels. This difference can most likely be explained by the differences in the foundations of the liberal and conservative ideologies. Those who have a liberal ideology tend to support more government, and therefore must trust the government to do what’s right. Conservatives tend to have a hands off approach, usually due to a lack of trust. We find that ideology drives more of a difference than race, education, or income.

We now look at more policy/opinion questions. The first is, “Do you think undocumented immigrants who are living and working in the United States should be:” 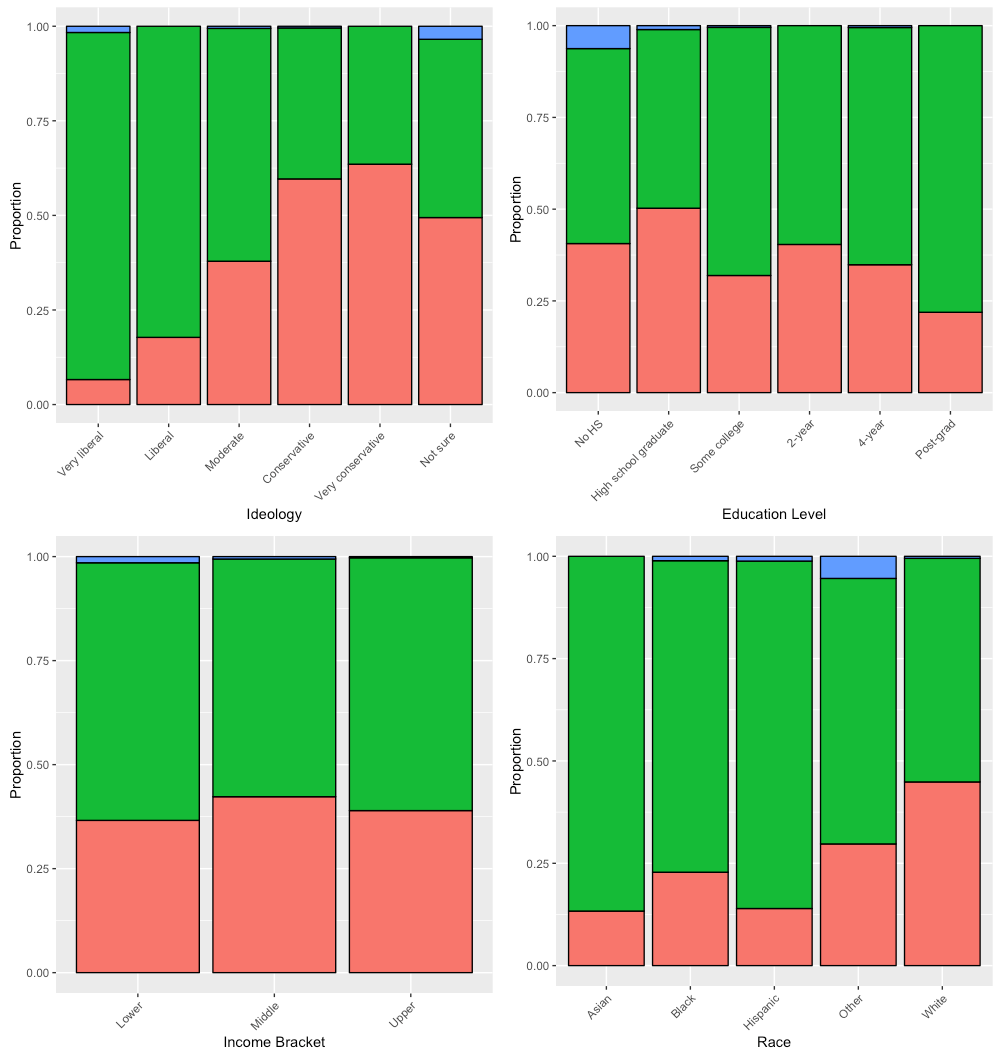 We see that there is no difference between income groups, and a small difference between races and education levels. Again, we find that the largest difference is among those with differing ideologies. The next figure shows the same. It represents the question, “If the owner of a business which provides wedding services did not want to provide services to a same-sex couple because his or her religion leads him or her to oppose same-sex marriage, should the business owner:” 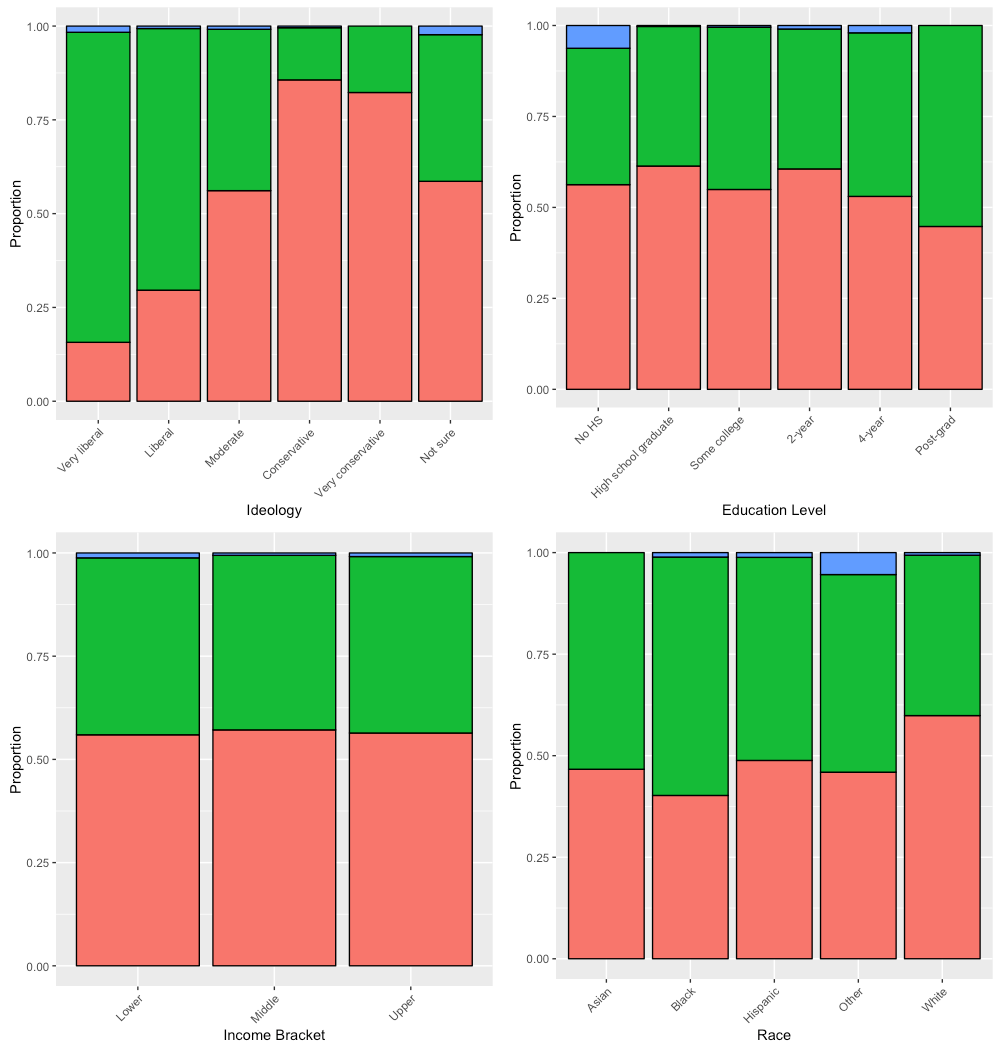 One would probably guess that differences in questions about undocumented immigrants or same sex marriage would be largest among those with differing ideologies, but the next value related figures show a similar story.

The figure below represents the responses to the question, “To what degree do you agree with this statement: This country would be better off if we worried less about how equal people are.” 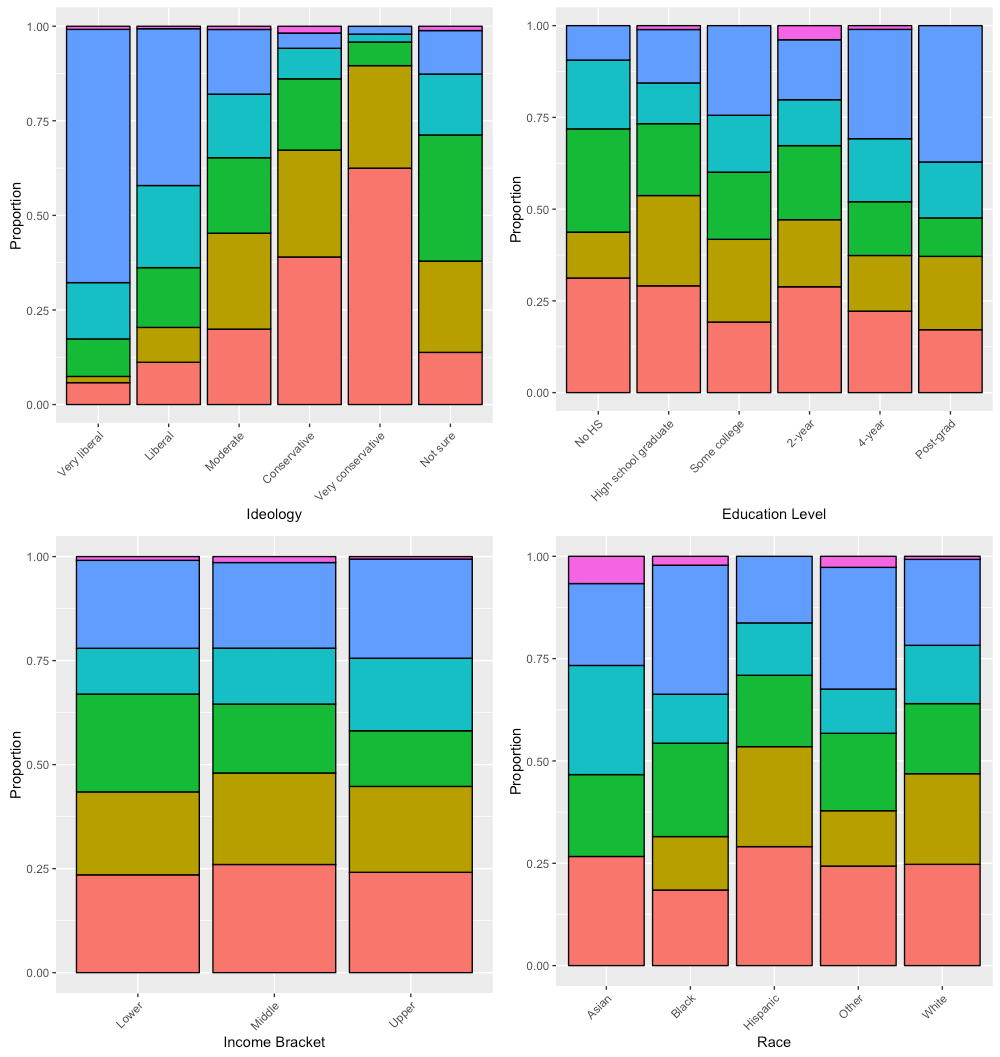 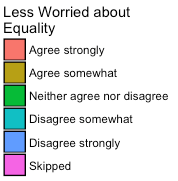 Figure 4: Would the country be better off if we worried less about equality?

Very interestingly, we see the same trend. As we move from left to right on the ideology graph, we see much more agreement. This trend is more apparent among those with different ideologies than among different incomes, education levels, or races.

We then look at responses to the question, “What factor does being born into a wealthy family explain why people have wealth?” 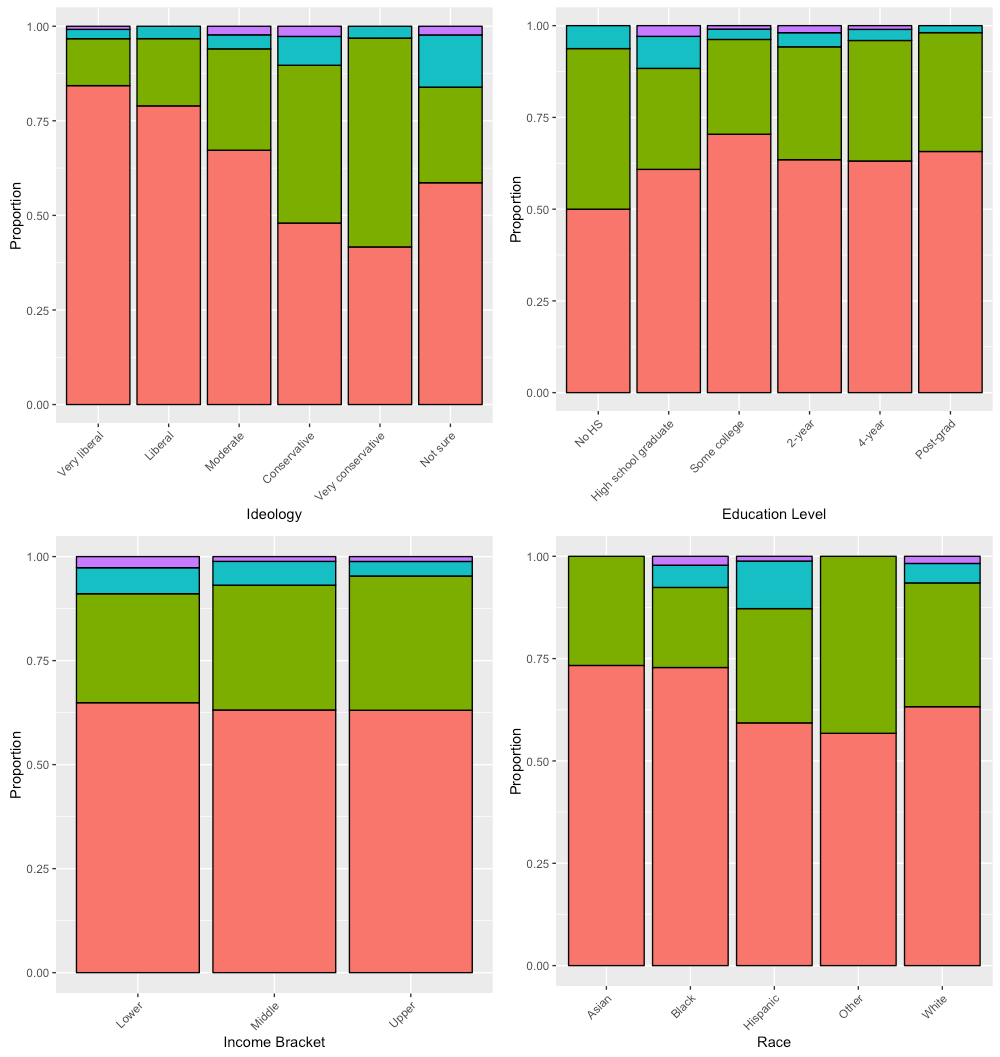 Figure 5: Being born into a wealthy family

The last figure concerns the opposite, namely factors that explain why people live in need. This figure corresponds to the factor: because of injustice in our society. 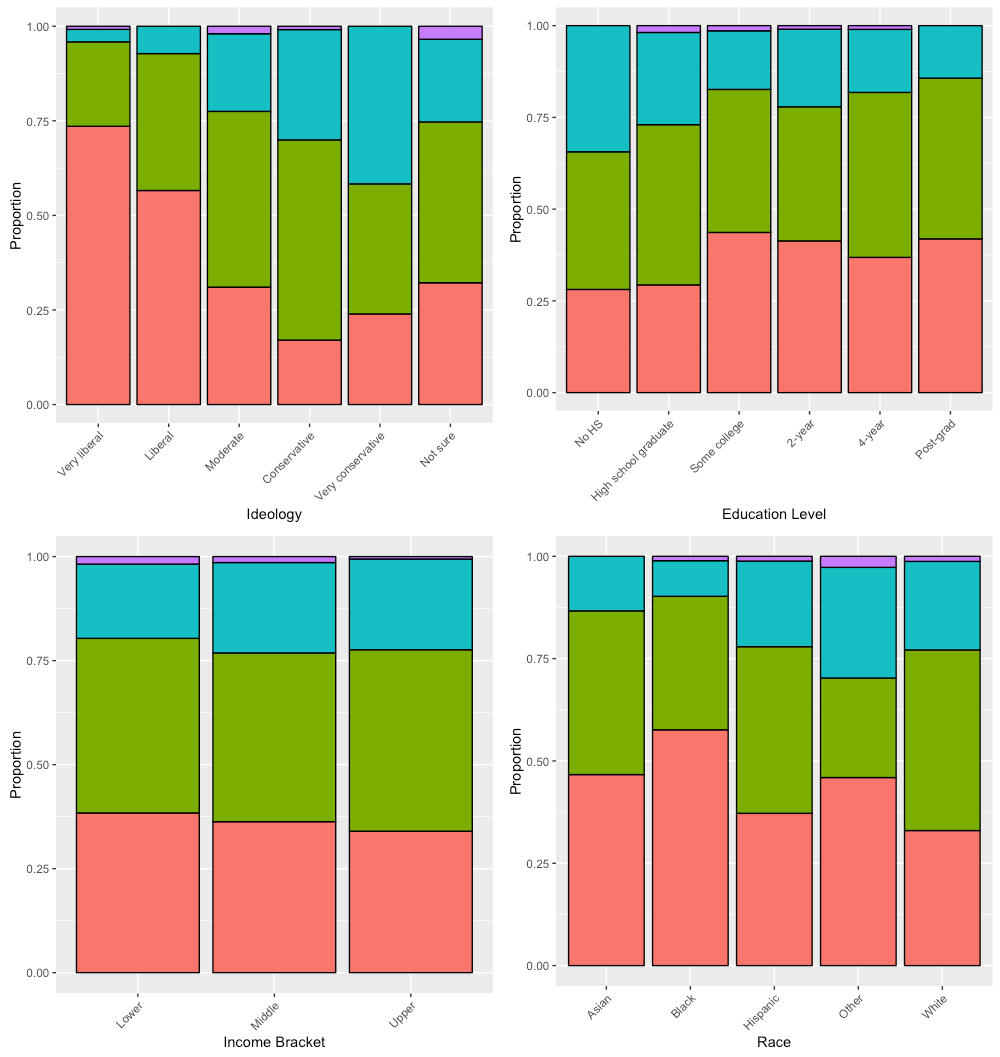 Figure 6: Because of injustice in our society

These figures confirm our initial hypothesis. Partisanship/ideology does in fact play a bigger role in optimism, perceptions, opinions, and values than income, education, or race. This confirms the theory that most people view issues from a partisan lenses.

We hope you have enjoyed our reports. Make sure to check them out again next year!

Posted by Will Bordash on May 1, 2017
Comments Off on What Drives Opinion?