The Politics Behind Views of Colin Kaepernick

By Brayden Zimmerman ’20 and Will Bordash ’18

Over the past few days, our country has gone through another episode of questioning our politics, our politicians, and our ideals after multiple pro athletes and pro sports teams decided to either stay in their locker room or kneel during the national anthem. President Trump spoke of this issue during the campaign last August, saying, “Well I have followed [the Kaepernick story], and I think it’s personally not a good thing. I think it’s a terrible thing. And you know, maybe he should find a country that works better for him, let him try, it won’t happen.” After this past weekend, Trump has made more comments regarding the issue, saying, “Wouldn’t you love to see one of these NFL owners, when somebody disrespects our flag, say, ‘Get that son of a b—- off the field right now. Out, you’re fired!’ ”

Many politicians and pundits across the country have made their feelings clear, but a few fiery interviews don’t tell the whole story about the way the American public truly thinks. This article tries to shed light on that. Using data from a nationally representative survey conducted in early September 2017 (see details on methodology at this link, we look at favorability ratings of Colin Kaepernick from this past summer to see how politics, identity, and other characteristics affect views of Kaepernick.

All told, roughly 3 in 4 (72%) of Americans knew enough about Kaepernick to hold an opinion. Of these, 44% of Americans held an unfavorable view of Kaepernick, 25% viewed him favorably, and 31% held middle of the road views. Kaepernick, in other words, is generally viewed more unfavorably than favorably. These views, though, mask significant divides across political and racial lines.

We begin by looking at favorability of Kaepernick by vote in the 2016 election. 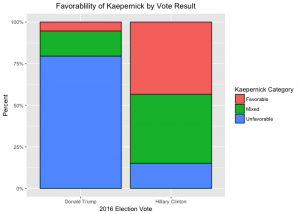 Next, we look at race. 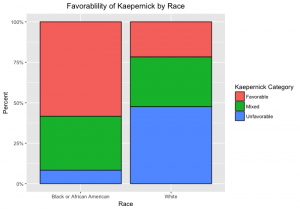 Next, we look at party. 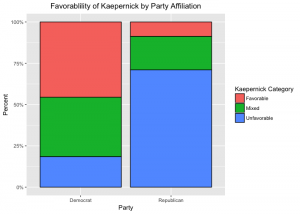 These results show what might be expected: Republicans tend to view Kaepernick less favorably than Democrats. But while the differences between Democrats and Republicans are large, they are smaller than the differences between Trump and Clinton voters. Only 56% of self-identified Republicans, for example, view Kaepernick unfavorably, while 77% of Trump voters do. These numbers give some credence to the idea that Trump worked to mobilize voters around issues of identity and a particular sense of patriotism, which is reflected in deeply unfavorable views toward the first NFL athlete to kneel for the national anthem to protest police violence.

Posted by Brayden Zimmerman on September 26, 2017
Comments Off on The Politics Behind Views of Colin Kaepernick