The U.S. Higher Education System: What Should We Get from It and How Is It Working?

Written by Will Bordash ’18 and Brayden Zimmerman’20

Education is a cornerstone for economic and social mobility. Scholars have consistently found that higher education has been a, “key way for poor Americans to find opportunities to transform their economic circumstances.” In college specifically, students develop skills that help them better their lives, especially economically. David Card, in Estimating the Return to Schooling: Progress on Some Persistent Econometric Problems, suggests that there is a causal relationship between increases in education and increases in earnings. Clearly the skills students learn in college help them for the rest of their lives, but what skills are the most important? Is the current higher education system in the US working?

Below, we look to see what the American population thinks of these two questions using data from a nationally representative survey conducted in early September 2017  (see details on methodology at this link). The survey presented the 1074 respondents with statements regarding the college experience. The two statements of interest for this report are: “What is the most important factor in the overall college experience”, and, “How would you grade higher education in the United States”. Specifically, we look to see if age and political ideology help to explain the responses to these questions.

First we would like to point out that there were two clear favorite important factors. 466 respondents (43.39%) said that “Learning critical thinking skills” was the most important. “Preparing for a successful career” was second with 395 responses (36.78%). These two responses account for over 80% of the total responses. The skill that the least amount of people said was the most important was “Developing an appreciation for art and literature” with only 1.3% of total respondents.

We find an interesting trend when we break down the responses by the factors described above. First, we look at how self-identified ideology impacts the responses to the two questions of interest. 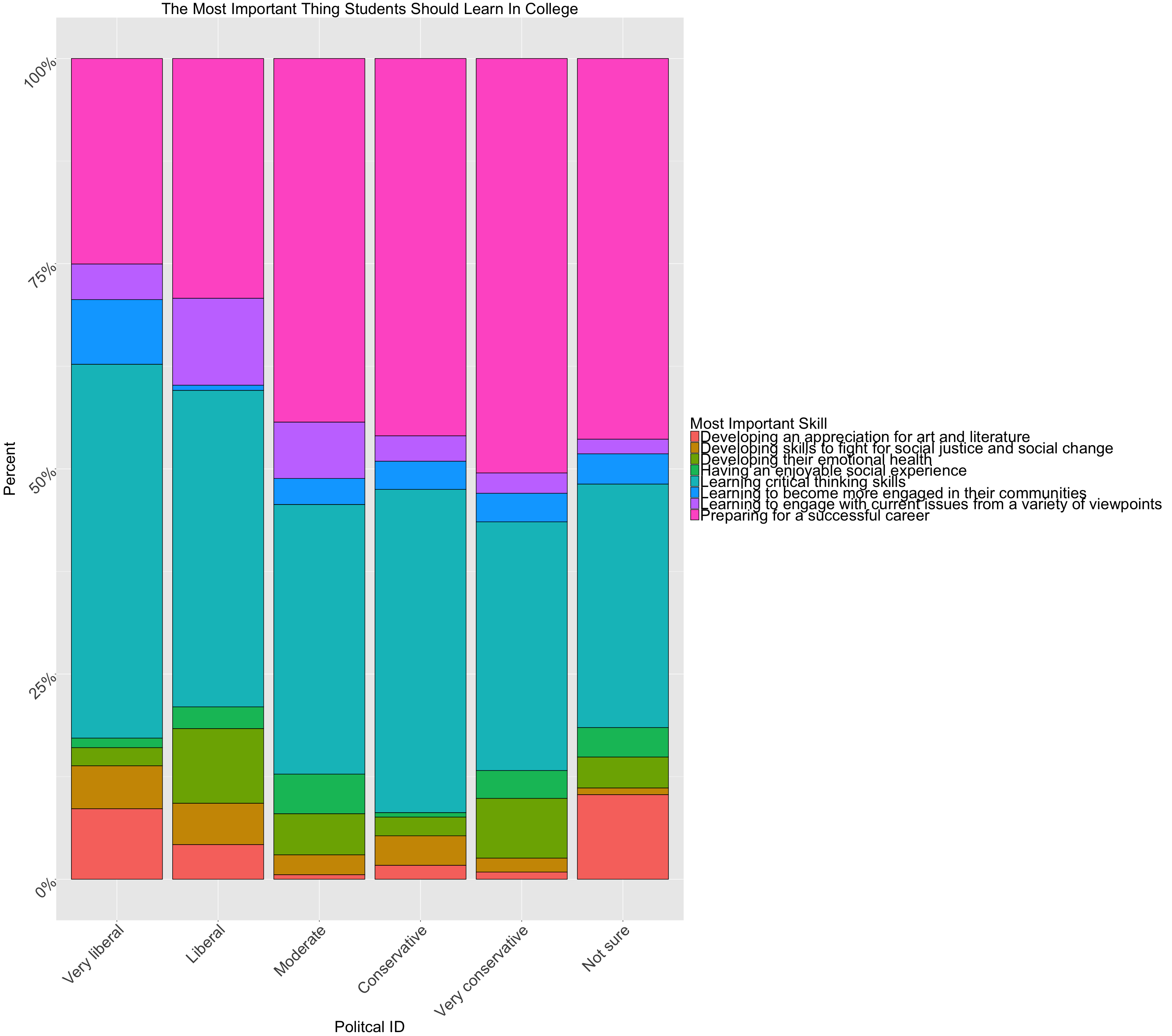 Figure 1. The Most Important Thing Students Should Learn: Ideology 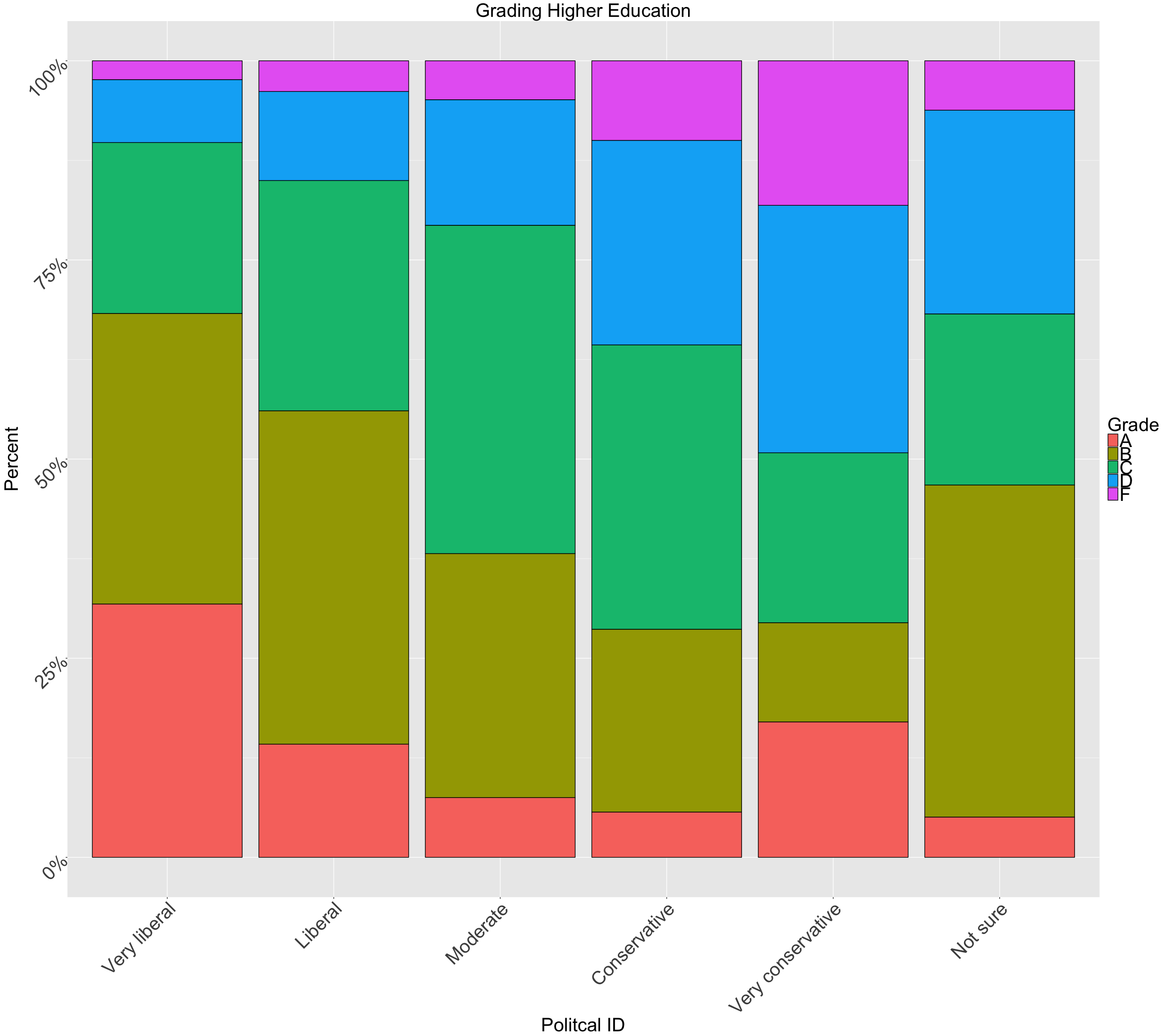 Here we see two interesting trends emerge. As we move left to right on the ideology scale, we see a shift in majority of responses to the most important factor question  from “learning critical thinking skills” to “prepare for a successful career”. Additionally, those who identify as liberal or very liberal were much more likely to give the United States higher education system a better grade than those who identify as conservative or very conservative. This points to the argument that conservatives view the purpose of higher education as more of a tool to better a career path than to increase engagement in communities or learn specific skills.

Now we look at age divided by generations. 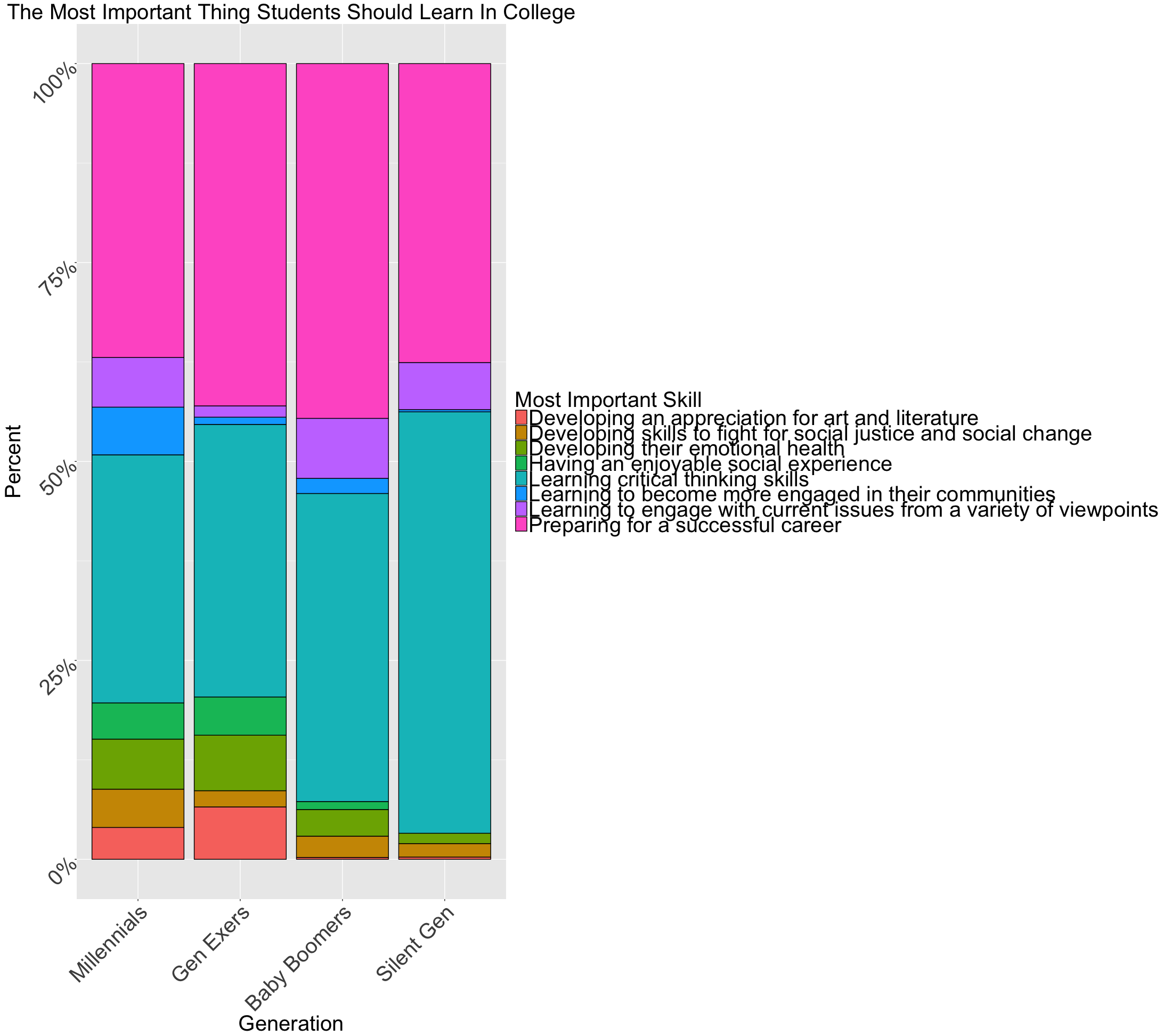 Figure 3. The Most Important Thing Students Should Learn: Generations 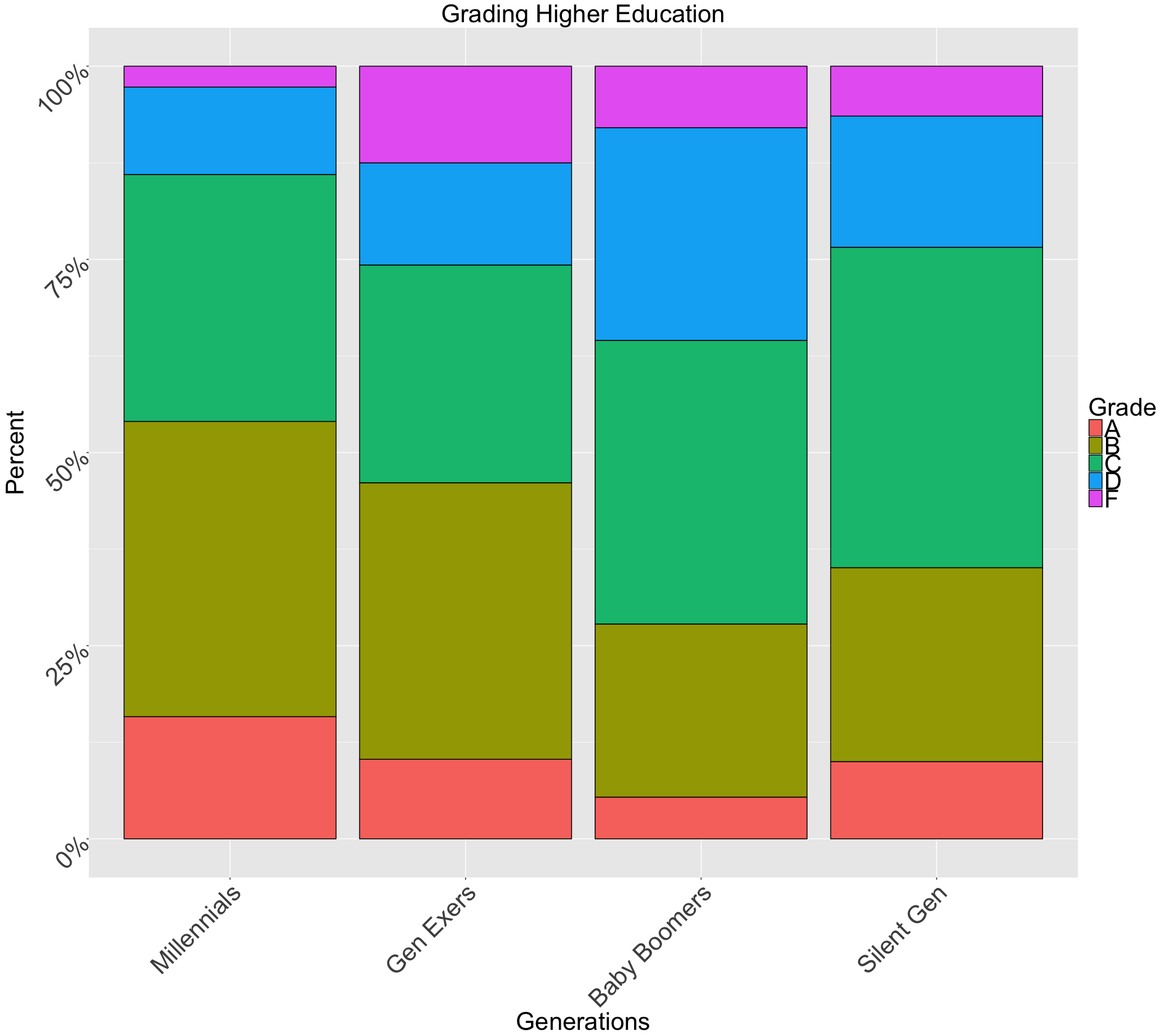 Interestingly, only one of the two major skills change dramatically with age. We find that as age increases, so does the view that the most important factor of college is learning critical thinking skills. A majority of the Silent Generation respondents felt that was the most important factor, while only a little over a quarter of Millennials agreed. We also found an interesting relationship between age and views about the US higher education system. Over 50% of Millennials graded the higher education system above a B, while only a little over a quarter of the Baby Boomers did. We see a generally negative relationship between age and grade of higher education system.

We also looked to see if race played any role in either of these two questions and found that whites and blacks generally agreed. Overall, we find that conservatives and liberals generally disagree about what the most important factor of college is, with conservatives leaning towards career preparation and liberals leaning towards critical thinking skills. We find that liberals view our higher education system more favorably than conservatives, and that there is a generally negative relationship between age and views of the higher education system.

In our next report, we will look at another issue very relevant to college communities, namely freedom (or lack there of) of speech and expression.

Posted by Will Bordash on November 3, 2017
Comments Off on The U.S. Higher Education System: What Should We Get from It and How Is It Working?