Bucknell’s most recent survey found that Americans are becoming more pro-immigrant. But there are still large segments of the country who still hold at least some anti-immigrant views? What differentiates those who hold pro- and anti-immigrant views? Our survey shows that it is a fear that immigrants might be violent.

A nationally representative survey, conducted by YouGov for the Bucknell Institute for Public Policy during the week of March 26-31, asked respondents how well they thought each of these describes new immigrants to the United States: hardworking,  ambitious, violent, and intelligent. We found that, overwhelmingly, respondents of all political affiliations thought new immigrants were hardworking, ambitious, and intelligent. We found that Republicans tended to believe new immigrants are violent, while Democrats believed that they are not.

Things get interesting when we compare by party. 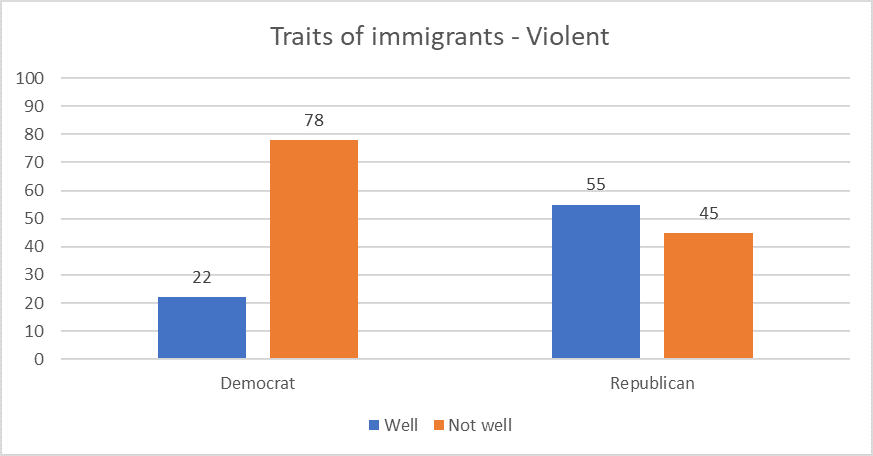 The following figure displays how polarized views are about this question when it comes to ideology.

The clear difference here is that republicans and conservatives believed that new immigrants are violent, while democrats and liberals did not. This could be due to the rhetoric of the current president and the large focus that the republican party gave to violent illegal immigrants during their convention. This data seems to point to the conclusion that the major factor that drives the majority of republicans to be skeptical of new immigrants is the concern of violence.

For information on methodology, see below.

YouGov interviewed 1116 respondents who were then matched down to a sample of 1000 to produce the final dataset. The respondents were matched to a sampling frame on gender, age, race, and education. The frame was constructed by stratified sampling from the full 2016 American Community Survey (ACS) 1- year sample with selection within strata by weighted sampling with replacements (using the person weights on the public use file).

Posted by Brayden Zimmerman on May 16, 2018
Comments Off on What Drives Anti-Immigrant Views? Bucknell Survey Finds It’s Fear of Violence