Talk with Margo Anderson ’67 on the Census 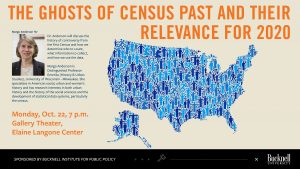 Come join us for a talk in the Gallery Theater, Elaine Langone Center, on Monday, October 22nd at 7 p.m. to hear Margo Anderson ’67 discuss the history of controversy from the first Census and how we determine who to count, what information to collect, and how we use the data.

Margo Anderson is Distinguished Professor Emerita (History & Urban Studies), University of Wisconsin – Milwaukee. She specializes in American social, urban and women’s history and has research interests in both urban history and the history of the social sciences and the development of statistical data systems, particularly the census. Her publications include the second edition of The American Census: A Social History (Yale University Press, 2015); Encyclopedia of the U.S. Census: From the Constitution to the American Community Survey (ACS), 2d ed. (Washington, D.C.: CQ Press, 2011), co-edited with Constance F. Citro and Joseph J. Salvo. She is Co-PI of the Encyclopedia of Milwaukee, https://emke.uwm.edu/, and co-edited the Perspectives on Milwaukee’s Past (University of Illinois Press, 2009). In 2006 she served as the President of the Social Science History Association.

Additional information about Margo can be found on her website: margoanderson.org